The History of Iowa City's Pedestrian Mall, by Colie Lumbreras 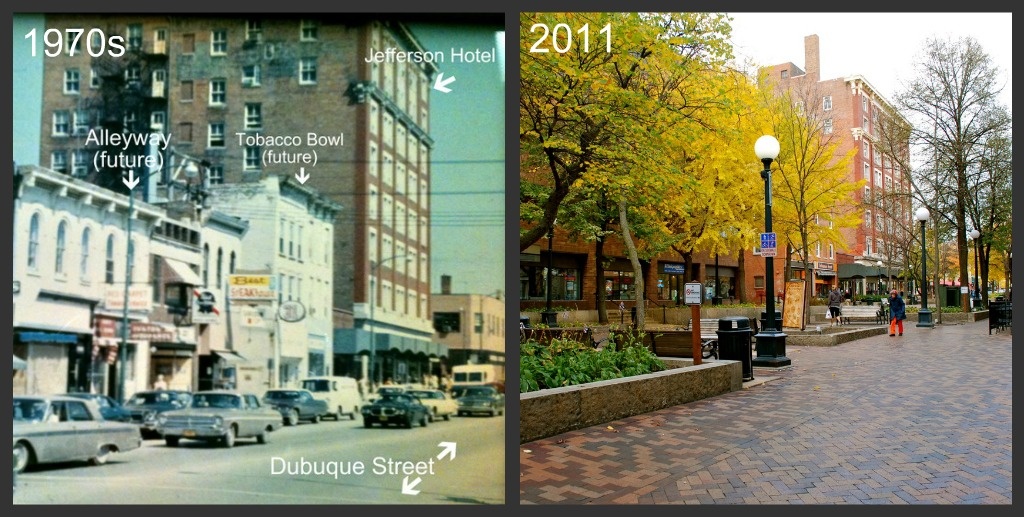 The pedestrian mall (ped mall) is a main place of congregation for many Iowa City residents. Stores, bars and restaurants, a park for kids and other businesses occupy the pedestrian mall’s brick pathway.

Today the pedestrian mall has laid brick as the walkway, gardening surrounded by limestone, a water spout/fountain in the middle and plenty of trees that provide shade on a sunny day.  On any give day, families are socializing around the playground students studying on the shaded benches, people eating on the outside patios of restaurants, and the pianos in the pedestrian mall being played. Other than the Old Capital, it is a great gathering area for everyone in Iowa City.

Nighttime on the pedestrian mall on the weekends changes this scene. There are still residents who enjoy the outdoor seating of restaurants if it is warm enough, on some nights a band can be found playing outside of the Sheraton, and there are less children out and more college kids going out. The food carts set up at night, there are police patrolling regularly, more people come out for drinks and there is music blasting in every which way from each bar.

The pedestrian mall wasn’t always like this – or even there at all. It resulted from the urban renewal in the 1970s, when the federal government would give money to cities to tear down old buildings and build new ones. Iowa City’s pedestrian mall construction started at the 1977.

Jeff Davidson was a student here at The University of Iowa at the time and now works at City Hall as Director of Planning & Community Development in Iowa City. He said the Old Capital Center used to be two blocks of buildings that were torn down and where the pedestrian mall is, there was College Street and Dubuque Street.

“In retrospect I would assume a lot of cities wished they kept their old buildings instead of tearing it down during the urban renewal,” Davidson said. “But I remember it was really controversial putting the hotel in the middle of Dubuque Street.”

College Street continued through where the pedestrian mall is now and Dubuque Street continued all the way through. Once the pedestrian mall was built, and the Sheraton went up in the middle of Dubuque Street, so it picked back up on the other side of the hotel. Washington Street used to be a two way street, and then was made into a one way. According to Davidson, designs are being made now and it will go back to a two way street again sometime during spring of 2012.

According to Davidson and old Iowa City Press Citizens, he remembers pedestrian malls were popular in the 1970s and Iowa City had a lot of debate on where to revamp with the Urban Renewal funds. In March of 1977, the Iowa City Press Citizen reported that the funds were approved for the pedestrian mall and it was going to cost roughly $1.8 million. They city council didn’t want to spend too much money per square foot, so they settled with $12 per square foot, which was towards the maximum price they wanted to spend. About $400,000 went to the “essentials,” underground sewers, water improvements and a bus lane. The focal point was a source of argument with the pedestrian mall, whether it was a fountain or a statue or park. But it was eventually decided that the small water fountain that is there today would be enough because it’s not too big and flashy but it still attracts attention.

At the time, Associated Engineers of Mason City and Sasaki Associated of Watertown Massachusetts were working on the designs of the pedestrian mall. City Manager Neal G. Berlin had stated on March 15, 1977 that construction would begin at the end of the summer, and according to Davidson, that time sounds about right.

Davidson said the pedestrian mall has always had a brick walkway, which gets really slick when it’s wet or has snow on it, and the trees weren’t nearly as big.

“The planters used to be old railroad ties, but today they are limestone. The brick isn’t the original brick, it has been done a few times. There have been planters, sculptures, art and trees added throughout the years,” said Davidson, who stayed in Iowa City after college.

“I think Iowa City’s pedestrian mall is one of the few left, [some] cities changed theirs back,” said Davidson. “I think it was the right combination of factors; it was successful, and there has been no consideration of putting it back. It was even considered expanding [the pedestrian mall] to more streets, but they obviously stopped.”

The pedestrian malls is very popular for the outdoor seating, but ordinances are placed for restaurants have to follow, such as when they can serve alcohol, fire escapes and the hours of operation. Regardless, it is something that draws people to the area during lunch and dinner hours.

A few things changed in the pedestrian mall, such as what bars are popular, what stores come and go, and the planters. When Davidson went to college, there was a bar where The Union is now and it was very popular and Brothers Bar & Grill used to be the unpopular bar. Food carts started popping up around the 1990s to feed the late night crowd, and some clothing stores, jewelry stores, etc. has changed. The trees used to be smaller. The flowers are changed out every few seasons to keep things blooming.

How We See It

Pictures of the Pedestrian Mall, photos taken by Colie Lumbreras 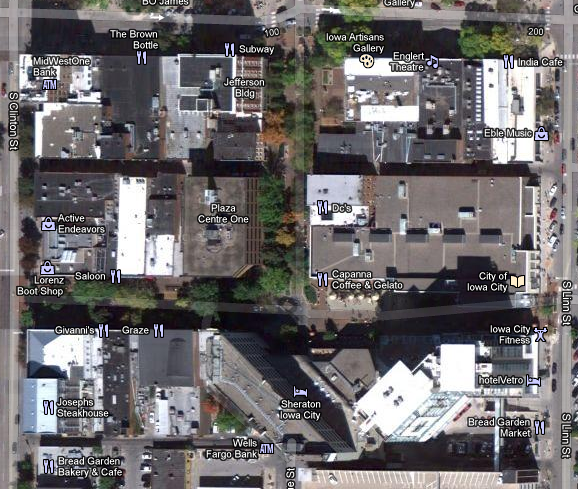