Impact The Moonstone had on Literature

Rise of the Detective Genre
According to Christopher Pittard of University of Newcastle, the detective genre really began its rise in popularity in the 1840s with Edgar Allen Poe's Dupin tales.  However, mystery stories had been around far longer, mostly published in 'penny dreadfuls' and not considered true literature.  Most of the crime-related literature up to 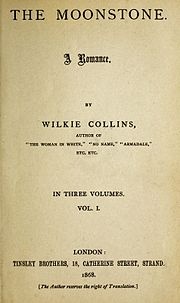 this point featured the criminal as a sympathetic character and did not go into how the crime was investigated.  Biographies of former detectives (the stories of Eugene-Francois Vidocq were exceptionally popular in the 1820s) and 'True Crime' stories were also widely read, which led to the rise of detective stories as a literary genre.  The sensation novel was also extremely popular and can be described as a sub-genre of the mystery and detective genre, but there is a definite difference between the two of them.  In mystery/detective novels, the mystery is far better defined in than it is in the sensation novels.  The main function of the sensation novel was to give the readers a rollicking, but chilling good time, spending more time on thrills than on development of a mystery. The first 'real' detective novels were written by Wilkie Collins, starting at the end of the 1850s with The Woman in White.  This particular story was published in serial form by one of Dickens' publications called All the Year Round and marked the beginning of Collins's career as a novelist.  However, The Woman in White was not marketed as a mystery story but as a 'sensation novel.'  The Moonstone was his second novel, and it was the first full-length work to feature a detective as the main character and chronicle an entire investigation.  The next truly famous set of detective stories were Sir Arthur Conan Doyle's Adventures of Sherlock Holmes, which were first published in the 1890s.  This blasted the detective story out of obscurity and into full-view of the entire public, upper, middle, and working class alike.  It was Sherlock Holmes that also caught the attention of the literary community, especially once other writers started borrowing Conan Doyle's storyline formulas.  The genre continued to change and expand, adding many sub-genres and new twists on old formulas (hard-boiled, Brit-Grit, the 'cosy,' etc), and it continues to span into more grim and psychological story lines today.

Tropes
The detective genre has many recognizable tropes, most of which were started by, or included in, The Moonstone.  The first of these tropes is something that William Marling, Ph.D. of Case Western Reserve University, OH calls "the Detective Code."  According to Marling, "Most versions of the "code" share these common points. The private eye is 1) dedicated to the client, 2) economical, if not thrifty, in his expenses and personal habits, 3) loyal to his profession, 4) cooperative, to some degree, with the police, 5) concerned with 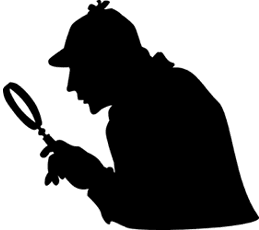 self-survival, and 6) unwilling to be duped by anyone."  Sergeant Cuff displays all of these characteristics in one way or another.  He is obviously very dedicated to his client, Lady Verinder, doing just about everything in his power to get the diamond back.  However, he is also willing to show some restraint, if Lady Verinder asks him to, particularly towards the servants.  He is also very economical, at least he seems so to Gabriel Betteredge.  Sergeant Cuff is described as being "miserably lean" and "dressed all in decent black," both signs of thrift, or even poverty, in those days.  He is loyal to his profession (even though he would much rather be gardening).  In spite of all his complaints about how much he dislikes being a private investigator, Sergeant Cuff continues to do everything he can to solve the case.  He even comes out of retirement to see it through to the end (something frequently done in modern day hard-boiled detective fiction).  The Sergeant is also reasonably cooperative with the local police force, even though they mess up the beginning of the investigation.  He does not do anything outside of the law or anything openly spiteful.  However, his knowledge and powers of deduction do make an enemy out of the superintendent.  Sergeant Cuff is also reasonably concerned with his own self-survival, dropping the case when he is asked to and not going out of his way to pursue it once it has been dropped. He also refuses to allow himself to be duped by any red herring that crops up throughout the course of the investigation.  Even when all the clues seemingly pointed to Rosanna Spearman as the culprit, Sergeant Cuff refused to believe that she was the actual thief.

The second trope used in The Moonstone is the "police are useless" trope.  The only reason that Sergeant Cuff is called to the case is because the the local police prove to be completely incompetent.  Superintendent Seegrave, head of the local police force, serves no real purpose besides being a dim-witted foil to the extremely intelligent Sergeant Cuff.  This trope is probably the most common in the detective genre, showing up in Conan Doyle's "Sherlock Holmes" series and Poe's collection of Dupin tales.  The police force (even Scotland Yard sometimes) turns to the services of the private investigator when they are completely stumped about a case.  The police are also frequently portrayed as being bumbling, at best, and dimwitted, at worst.  Superintendent Seegrave frequently disregards evidence (the paint smear on the door) and goes about the preliminary investigation in a very heavy handed manner (making the servants feel incriminated).  Once Sergeant Cuff is brought in, he wastes no time in showing the superintendent up and making him look like a complete fool, a very common occurrence in most detective novels.

The third trope used in The Moonstone is portraying the detective as an outsider.  As hard as Sergeant Cuff tries to solve the case, and as cordial as he is to all the servants and the Verinders, people simply do not like him.  Superintendent Seegrave despises him because he seems to be more intelligent.  Lady Verinder does not like him because he upsets the household.  Miss Rachel hates him because she thinks it his goal to incriminate Franklin Blake.  The servants are afraid of him because they think he's out to arrest all of them. He annoys the gardener because they have different views about how roses should be grown and managed.  Over all, Sergeant Cuff is viewed as an outsider that has no right to hang around with the 'normal' people.  Most other detective stories following The Moonstone have also used this trope.  Sherlock Holmes is the most famous example of the outsider detective.  Both he and Sergeant Cuff lack a lot of the social skills that were valued in their era.  They are extremely blunt and often very vague, two very unattractive traits.  They frequently do not reveal their own theories until the last moment, leaving everyone else in the dark for good portions of the case.  Sergeant Cuff also has a rather strange hobby that is seemingly out of line with his personality as a detective.  He has a passion for gardening, particularly roses.  This comes as a great surprise to the other characters and makes him seem even stranger, like Sherlock Holmes and his violin.

One of the most famous of all detective tropes that was started by The Moonstone is the detective's sidekick.  This particular trope was 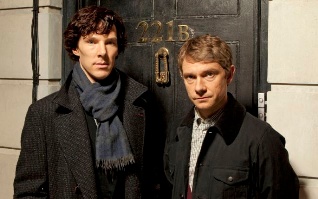 first filled by Gabriel Betteredge, the steward of the Verinder household.  He is a very likeable and reasonably intelligent man, however, he's a a bit of a bumbler and not nearly as smart or observant as Sergeant Cuff.  The main purpose he serves is to be a sounding board for Sergeant Cuff's theories, as well as a resource for information.  Many detective stories, particularly those that were also written in the Victorian Era, were told from the point of view of the sidekick.  The most famous of these are The Adventures of Sherlock Holmes (as told by Watson) and the Auguste Dupin stories (as told by an unnamed best friend).  However, The Moonstone is considered one of the first to employ this trope (some believe that Conan Doyle got some of his inspiration for the dynamic between Sherlock and Watson from The Moonstone, but this theory has not been proven).  The main reason so many detective stories are told in this manner is because it gets readers close to the action without giving away what the detective knows.

The last (but certainly not least or final) trope is the detective knowing more than the readers and the narrator.  This is probably the most obvious trope in The Moonstone.  As soon as Sergeant Cuff steps onto the scene, the characters (and readers alike) get the feeling he knows far more about what's going on than he lets on.  He is described by Betteredge as having "eyes of a steely light grey...looking as if they expected something more from you than you were aware of yourself" a trait that many future literary detectives come to claim as well.  Throughout the entire investigation, Sergeant Cuff's vague answers to questions asked, his coolness when things don't go according to plan, and his slowness to jump to any conclusions reveal that he seems to know far more about what direction the case is going than he lets on.

The Moonstone in Pop Culture
There have been a surprising number of TV, movie, and radio adaptations of The Moonstone.  In 1934, it was made into an American film released by Monogram Pictures Corporation to much critical acclaim.  In 1945, The Moonstone was adapted into the 67th episode of the radio show The Weird Circle.  After WWII, in 1959, the BBC made its first television adaptation of the novel.  It did not air in America.  However, in 1972 the BBC remade it and aired it on America on Masterpiece Theater, where it was a big success.  This past year, The Moonstone was made into 4, hour long radio serial episodes for BBC Radio 4. BBC has also commissioned a four episode reboot of The Moonstone to be aired sometime around Christmas 2012.