Introduction to the Author
About the Author
List of Works
Who was Sherlock Holmes?
"The Speckled Band"
"A Scandal in Bohemia"
"The Blanched Soldier"
"The Final Problem"
Resources and Links
Image Gallery
References

Last Words: "You are wonderful." (to wife Jean)

Introduction to the Author

Arthur Ignatius Conan Doyle was born the third of ten siblings on May 22nd, 1859, in Edinburgh, Scotland.  Charles Altamont Doyle, Arthur's father, a chronic alcoholic, was the only member of his family, who apart from fathering a brilliant son, never accomplished anything of note. At the age of twenty-two, Charles had married Mary Foley, a vivacious and very well educated young woman of seventeen. His mother had a passion for books and was a fantastic storyteller. Arthur once wrote of his mother’s gift of “sinking her voice to a horror-stricken whisper” when she reached the culminating point of a story. His family was very poor and they had a hard time functioning with his father’s erratic behavior. When Arthur was nine years old the wealthy members of the Doyle family offered to pay for him to go to school in England. For seven years he went to a Jesuit boarding school. During those years, Arthur’s only moments of joy were when he wrote his mother, which became a regular habit that lasted the reminder of her life, and he also participated in sports, at which he was very talented. Among finding his talent for sports, he also noticed his ability to tell stories. He was said to be found with hoards of younger students surrounding him listening to his stories he would make up to entertain them. He graduated in 1876 at the age of seventeen.

Years later he wrote, "Perhaps it was good for me that the times were hard, for I was wild, full blooded and a trifle reckless. But the situation called for energy and application so that one was bound to try to meet it. My mother had been so splendid that I could not fail her."

Arthur Doyle went on to write some of the most captivating literature of his time, literature that includes the stories of the detective Sherlock Holmes.(1) 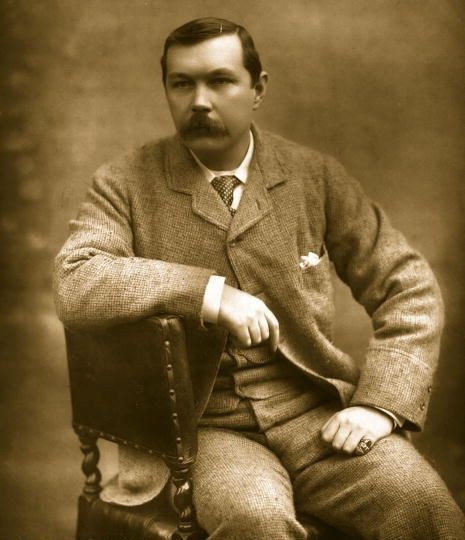 Clicking on the following links will redirect you to the Google Books version of that story. Arthur Conan Doyle's later publications are still under copyright. Only available works have links provided.

Arthur Conan Doyle wrote many other works of fiction, pamphlets, plays, poems, short stories, and non-fiction. For lists of those pieces, please see our section on Resources and Links.

Who Was Sherlock Holmes?

The Sherlock Holmes Museum is located at 221b Baker’s Street, London, England, the residence of the fictional character, Sherlock Holmes. Some individuals often forget, or they do not realize, that Holmes was not a real person. The existence of the museum at this address (which is actually 239 Baker’s Street) creates further confusion on the subject of Holmes’ status as a fictional character.

Sherlock Holmes was born on January 6, 1854. As an adult detective, Holmes is over six feet tall and often depicted wearing a deerstalker hat and a checked cape, although this imagery is not necessarily true to the stories. Remembered mostly for his knowledge on a large variety of topics, Holmes is always expanding his knowledge through reading and experimentation. Throughout the stories, Holmes demonstrates his fighting abilities, demonstrated through a variety of self-defense techniques.

Particularly skilled at disguising himself, Sherlock Holmes frequently uses a variety of disguises in order to obtain information for a case or as a means of escaping situations. His disguises are often at such a high level that his close friend, Dr. Watson does not recognize him at first glance. Holmes regularly employs the disguise of a physical handicap as means to further disguise his true identity, going beyond the simple costume.

Artist Sydney Paget illustrated many of the original stories is credited for creating the signature ‘Holmes Look’ many have come to associate with him over the years, particularly the deerstalker hat. In reality, Holmes is described as wearing a wide variety of coats and hats. The pipe modern readers link with Holmes was never mentioned in the stories either. That particular addition to his look is credited to actor William Gillette.(3)

To view complete lists of Arthur Conan Doyle's works, please visit one of the following sites:

For information about the most recent film adaptation:

For more information regarding the copyright battle over Sherlock Holmes, visit the following link to an article written for The New York Times about the ways in which ownership of the rights have been transferred over the years:

It has been reported that Arthur Conan Doyle held different opinions regarding his most popular character throughout his life. This article from The Wall Street Journal covers many of these, offering some insight into the author's view on both his writing and his creation:

The following youtube clips provide examples of how Sherlock Holmes has been adapted for modern audiences. The first video is a trailer for an episode of Star Trek: The Next Generation in which a character named Data participates in a simulated mystery game based on the Sherlock Holmes stories. The second video is a clip from a Sesame Street episode, introducing Sherlock Holmes to a much younger audience than is often seen.

This page was created by: Jessica Coon, Sean Hall, Nicole Loisi, and Keifer Yeoman in the spring of 2011.