The Moonstone begins with a letter telling how the Moonstone (a huge, yellow, and supposedly cursed diamond) was stolen from an Indian temple by John Herncastle during the Battle of Seringapatam and taken to England. The novel skips in time fifty years to a narration by Gabriel Betteredge, a steward for the wealthy Verinder family, relatives of the late John Herncastle. Betteredge has been tasked with telling the story of how the Moonstone came to Rachel, his employer's daughter, and what happened afterwards.

Franklin Blake, Rachel's cousin, first brings the Moonstone into the Verinder household. However, he had been followed by three Indians that were possibly looking to steal the diamond and return it to India. Franklin and Rachel hit it off almost immediately and start to fall in love.

Unfortunately for them, Rachel has another cousin, a Godfrey Ablewhite, who is also in love with her. Godfrey seems to be the better marriage candidate at first glance. He is a well established religious man and head of many charities. Franklin Blake also has an extra admirer, Rosanna Spearman, one of the servants. However, neither Rachel nor Franklin pay Rosanna or Godfrey much mind.

The night of the birthday party, the Moonstone is (inevitably) stolen from Rachel's bedroom. Rachel is completely inconsolable and takes most of her anger out on Franklin Blake for seemingly no reason. The police are called and find nothing, so Sergeant Cuff, a famous detective, is called. Rachel is so upset by all the activity that she leaves the house and goes to London. However, Rosanna also starts exhibiting some strange behavior. This leads Sergeant Cuff to suspect that Rachel stole the Moonstone herself to pawn off with Rosanna as an accomplice. Unfortunately, shortly after Cuff makes that conviction, Rosanna disappears. She had committed suicide by jumping into the quicksand down by the ocean. She left her final note with one of her friends but only Franklin Blake could claim it.

Franklin Blake eventually seeks Rachel out and asks her why she was so mad at him when the Moonstone was stolen. It turns out, she had seen him take the diamond from her room that night. Franklin immediately starts doubting his sanity because he had absolutely no memory of taking the Moonstone. Luckily for him, he has a chance encounter with Ezra Jennings, a doctor's assistant with some radical theories about memory. Jennings thinks that Franklin had been given opium that night and that's why he could not remember anything. He decides to experiment and give Franklin opium again to see if he will repeat the actions he took the night the Moonstone was stolen. The experiment works, as Franklin got up in the middle of the night and sleepwalked into Rachel's room to take the fake diamond Jennings had set out.

The question then became: What happened to the Moonstone after Franklin took it? Franklin re-teams with Sergeant Cuff and they hunt through all the major London pawnbrokers to see if any of them had received an object of great value. They get a tip that the Moonstone will be picked up from the bank at a certain date, so they congregate there to wait. On the appointed day, a man in disguise comes to pick up the Moonstone. By the time Franklin and Sergeant Cuff catch up to him, he is already dead. The three Indians had murdered him and taken the Moonstone back to India.
Read full version of Plot Summary 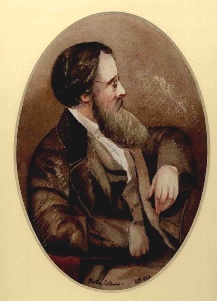 History of the Novel

The Moonstone was originally published in All the Year Round from January 4th- August 8th 1868 over the course of 32 installments.  According to Sandra Kemp, it was originally supposed to only consist of 26 installments, but was so well received by readers that Collins added more Victorian era touches to the novel, increasing it to fill up 6 more issues of All the Year Round (Collins xii).  All the Year Round was Charles Dickens’s British magazine that ran serialized fiction on a weekly basis.  It was also the launching pad for many other prominent Victorian novels, including Dickens’s own A Tale of Two Cities and Great Expectations.  The magazine was cheap and lacked illustrations, in order to appeal to the pockets of mid-19th century readers.  Each issue contained 24 pages of writing, formatted into two columns.

According to Andrew Gasson, “Dickens originally liked the story.  At a low point in his relationship with Collins, however, he wrote to Wills [sic]  'The construction is wearisome beyond endurance, and there is a vein of obstinate conceit in it that makes enemies of readers.’”  Regardless of Dickens’s feelings, the book was popular among Victorian readers.  This admiration lived on beyond its era, as famous 20th century literary critic and poet T.S. Eliot is reported to have dubbed The Moonstone as ‘the first, the longest and the best of the modern English detective novel,’ considerably high praise from a man raised in the same country as Sir Arthur Conan Doyle.

In Wilkie Collins’ previous novel, The Woman in White, he pioneered a genre known as the ‘sensation.’  Books in this genre usually addressed a relevant issue from the news, such as insanity, crime, bigamy, or arson (Collins xii).  For The Moonstone, Collins chose a style that bridged the gap between the conventional novel and the sensation novel.  As Sandra Kemp points out, Collins plays with the expectations his readers have of the sensation with Mrs Merridew at the story’s culmination.  Mrs Merridew expects an explosion that never comes, much as Collins’s readers expect some kind of surprising subject matter to appear at any given time in this novel.

In July 1868, the novel was published as The Moonstone:  A Romance in 3 volumes by Tinsley Brothers in London, and eventually as a one-volume edition in 1971 by Smith, Elder, and Co.

The novel has since been translated in French, Italian, Gaelic, German, and Russian.

Impact of The Moonstone on Literature

Rise of the Detective Genre

The Moonstone is considered by T.S. Elliot to be the first and best of the detective novels, so many other Victorian writers decided to follow in his footsteps.

Many of the most famous (and infamous) cliches, codes, and tropes in detective novels were borrowed from Wilkie Collins.

The Moonstone" in Pop Culture

Even though it was written in the 1800s, The Moonstone is still very well known today.

Read more about the impact on literature due to Wilkie Collins's The Moonstone.

Religion plays a role, as seen strongly in the Mrs. Clack’s narrative, in The Moonstone, but in varying degrees. Rachel and her mother, Lady Verinder, are Christian and members of the Church of England, but use it for social connections. However, their relative, Miss Clack, is convinced that they're going to go to hell unless they convert to her branch of Christianity. It seems those who talk about religion in the novel are those who are hypocrites.

In most Victorian novels, servants are often overlooked and seen as props. However, in The Moonstone, the servants are not only vocal, but even given narratives or large portions to speak.

4.Foreignness and “the other”

Being foreign or “the other” gives credentials to be not trusted or evil. The diamond Moonstone is from India, and the main characters suspect throughout that the three Indians who appeared at the Verinders' country house are somehow involved in the diamond's disappearance. Franklin Blake was educated in a foreign country, and Betteredge doesn't trust the "foreign sides" to his character. Ezra Jennings, the doctor's assistant, is only half English – and so many characters do not trust him.

It is clear that Franklin Blake is the editor of this collection of narrations which allows him to make footnotes or adjustments to his narrative to defend or clarify others. Calling into question the reliability of the narrators. If the narrator speaks of what they believe is true to us, and it turns out false, the reader has been lied to.

Like many Victorian novels The Moonstone ends in a marriage sequence. However, while it’s the stolen moonstone not the romance that moves the plot forward.

Emotional and fiscal debt are driving forces in this narrative. It is the emotional debt of the Brahmins that prompts them to give up their high social caste in an attempt to recover their sacred Moonstone.  As Mr Murthwaite puts it, “If a thousand lives stood between them and the getting back of their Diamond…they would take them all.  The sacrifice of a caste is a serious thing in India…” (Collins 84-85).

Allingham, Philip V. "All the Year Round." The Victorian Web: An Overview. Web. 28 Feb. 2012. <http://victorianweb.org/periodicals/ayr.html>.