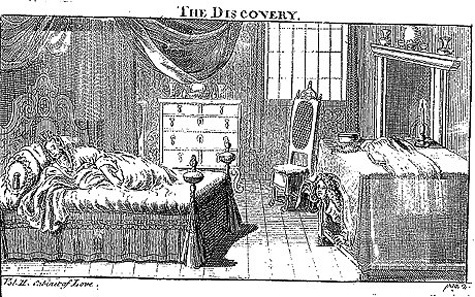 "The Discovery," an engraving printed throughout the 18th Century that accompanies the poem

The Internet is host to so many incredible things, and that sentence in itself is a huge understatement. The Internet holds all published human knowledge and then some. The Internet is like a shopping mall with a keyboard, a book without pages, a friend without a body. The Internet allows us to create new content, challenge our preexisting ideas, and connect us on a global scale never possible 30 years ago.

Google, Wikipedia, Facebook, YouTube, some of the most recognizable URL’s on the Internet. The most expensive domain? As of 2012, sex (dot) com (writing out the URL automatically leaves a link, which I do not care to do).

Watch the following video, 10 Mind Blowing Facts About The Internet:

Let’s break down the most important facts:

Based on our readings of Samuel Johnson I think he would’ve been slightly overwhelmed by the sheer amount of information on the Internet. For Johnson "...the English language was constantly and exponentially changing, both in the evolution of already established words and the creation of new words..." and now it is the evolution of new information. The rapid speed at which we try to keep up with it is very much the same as Johnson. It's an impossibly daunting task. How are we ever to make sense of it? Is there ever a chance we can become enlightened when we can't keep up with new information? And yet, with all of this amazing, precious, rich knowledge at our fingertips, 70% of the Internet holds pornography. Oh, how very proud Diderot would be (if he could wrap his mind around the concept of the Internet).

More importantly, how did we get here? Many blame television, music, and the Internet for a rise to a hyper sexualized society. Personally, I disagree. Many ancient cultures (and some today) walked around naked on a daily basis. No one calls them “hyper sexualized.” Were people not having sex before the Internet? I don’t think we’d be here to have this discussion if they weren’t.  From the time the first clock was wound, sex has been a part of not just human life, but also culture as many 17th Century literature shows. Contrary to what many argue, sexual content still existed “back then,” but it isn’t perceived as explicit because of how it is presented.

The theme of men sneaking into women's bedrooms seems to be common, and is quite startling.

Of course, Lady Mary Wortly Montagu crafted a response to Swift’s writing. Her response, also satirical, criticizes Swift directly. As we’ve read previously with Montagu, she has no issue talking about sexuality so it seems fitting that she would write a response to Swift’s sexist remarks. Montague humorously attacks Swift and in doing so, defends females of the type from male criticism. Both genders are guilty of putting forward a façade and want nothing more than approval.

Samuel Pepys gives us the perfect example as to how sexual content is very much present in the 17th century but may not be considered as overtly sexual because of how it is presented. Pepys is a man who has fallen out of love with his wife as he explains “…just as I have formerly been when in love with my wife” (2032). As a result of this, Pepys turns to another woman for companionship but his wife catches him in the act. Here,  Pepys uses his own terminology to refer to the woman’s body and the footnotes explain, “Pepys reports his illicit sexual activites in a “secret” language compounded of Latin, French, Spanish, and English” (2033). For some, Pepys’ word choice is less offensive rather than had he used the anatomically correct term, “vagina.”  The counter argument is that this cheeky terminology lacks a level of respect. For Kate Hudson, giving a man’s penis a nickname in How To Lose a Guy in 10 Days did not work out too well as you can see.

The idea that these 18th Century artists and writers were trying to understand is still trying to be understood today. Sexuality is still not fully understood. Is it biological or psychological? What is it that drives us to another person? For these artists, there work may have been satirical and even silly, but it is an integral piece of humanity that literally, keeps us moving forward. Perhaps the artists of this time are describing something that science cannot: “The drive to discover the passions inside of us all is not something that a person must inspire within themselves, but it is rather something that seems to develop naturally inside of everyone, much like passion itself.” In his diary, Samuel Pepys discusses this sort of understanding when talking about his own reading:

"We sang until almost night, and drank mighty good store of wine, and then

they parted, and I to my chamber, where I did read through "L'escholle des

filles," a lewd book, but what do no wrong once to read for information

among my books to my shame, and so at night to supper and to bed."

While Pepys says that his reading is for "information sake," he still feels compelled to burn it, guilty for reading, or owning, such content. This shame and stigma still surrounds such content today. It's an idea that has persisted throughout time. What has changed is how we are exposed to it.

Somewhere between the 17th century and the present, the way in which sexuality was described turned from coded language and witty poetry to graphic language, images, and videos. However, the discussion has always been around. At a time when printing and circulation was in full force, people were finally learning more about gender relations in other countries and continents and were genuinely interested. Now when it’s easier than ever to learn about others, interest seems to decrease and issues regarding gender equality and productive conversations about sexuality take a back seat in social and political conversations; an influx in information but not in interest. But in the land of the Internet, porn continues to hold the interest of 1.5 million people per day.