How are social networking sites misused?

One basic problem that can come with the use of social networking sites is the loss of individual privacy. This is because all social networking sites involve placing personal information on the internet, and it's possible for people in almost all corners of the world to see that information. There are privacy settings for these sites, but many young people can be careless about this. In addition, information placed on the internet creates a "digital footprint" that can't be erased as easily as words simply written on a piece of paper. Many young people don't make good choices about what to include on their profiles. In fact, in a survey of Britsh teens, it was found that 39 percent had posted something which they regretted later. Consequently, such students leave "digital footprints" that may be harmful in the future. Employers could look at their Facebook profiles and see pictures of illegal actions, for example.

A very serious problem which is related to loss of privacy is sexual predation on social networking sites. Because they don't always think before they post, students sometimes upload scandalous pictures of themselves onto their profiles. These could then be viewed by sexual predators. Students sometimes have other personal information, such as their phone number, on their sites as well. Even if this information isn't readily available to pedaphiles, it's possible to obtain it by chatting with the child or teenager. Social networking sites can be completely anonymous, and it's possible to create a fake profile as well. In fact, in a study of British teens, 25 percent admitted to creating a false identity online. In this way, a sexual predator can convince young people that he or she is simply another kid who they can trust.

A cyberbully is someone who abuses another person through the internet or other technology. Social networking sites are often breeding grounds for such abuse. This is because it's so quick and easy to post a mean comment, send an intimidating message, start a nasty rumor, or upload embarrassing photos. Students don't think twice about their actions because the time between planning a prank and actually going through with it is greatly decreased on a social networking site. It's possible to be completely anonymous as well, so there is less chance of getting caught. In a study of British teenagers, 37 percent had admitted to using a social networking site to make fun of a peer. In addition to sending abusive comments to others, it's also very easy to "hack" into another person's profile. In the same study, 1 in 4 teens said they were able to do this at one point. That means that students can do damage by acting like someone else while chatting or changing that person's profiile.

It seems to be contradictory that people would lose social skills because of social networking sites. However, some people perceive this as another disadvantage. Many of today's students feel more comfortable chatting with a person online than talking in a verbal conversation. Also, almost anything you can do in real life can be done online in virtual realities like Second Life. There have even been many virtual marriages within this community. More importantly, you can do all kinds of things you could never do in real life, and you can give yourself a completely unique identity (as shown in the picture below). In Second Life, the avatars can even fly! Sometimes people start to prefer their fake online lives to their actual lives, and this is when social networking sites start to negatively affect social skills. Some argue that there is even a mental disease that should officially be labeled "Internet Addiction Disorder." 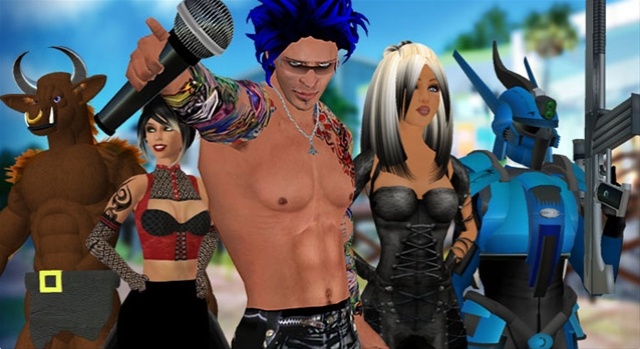