With the exception of the year Antoinette enters Mount Calvary Convent, no specific dates are given for the novel’s significant shifts in setting. With Antoinette’s often fragmented style of narration, as well as the switch between narrators, it is unclear exactly how much time she spends in each place – weeks, months, or even years. Rhys’ choice to exclude dates suggests Antoinette’s refusal of more linear, “western” notions of time. Instead she seems to favor a more “organic” concept of time, one which is informed by her physical senses and less concerned with specific dates. 1

1831 - 1832 (December 25 – January 4) Baptist War (also known as the Christmas Rebellion)
Under the direction of Samuel Sharpe, a Baptist preacher, Jamaican slaves sought a wage raise and more independence. Despite the slaves’ refusal to work, slave-owners still denied their initial demands which led to a violent ten-day rebellion. The rebellion resulted in the death of over 300 slaves, but less than 20 white people. 2

1833 British Emancipation Act (also known as Slavery Abolition Act 1833)
Motivated in large part by violence of the Baptist War, the British Parliament developed the Slavery Abolition Act 1833 which came into effect on August 1, 1834. Though slavery was officially abolished, only children under the age of six were completely freed. Anyone over that age was labeled an “apprentice,” which granted them still very limited freedom. For years after the Slavery Abolition Act, peaceful demonstrations were held in protest of the apprenticeship system. Though the apprenticeships were not scheduled to end until 1840, full emancipation began instead in August 1838, its early beginning a result of the protests. 3

1839 Antoinette enters the convent (the novel’s only concrete date)

Due to the recent emancipation of Jamaican slaves, the characters in Wide Sargasso Sea, especially the Cosway family and their staff, are faced with the challenge of finding their “new” place in the hierarchy of Jamaican society. Their social standing is complicated. On one hand, the family still maintains a position of power – their household staff is made up of their former slaves who continue to work for them. Most notable of these is Christophine, who serves as Antoinette’s caretaker in place of her neglectful mother Annette. Though Christophine no longer holds a legal obligation to the Cosway family, she still continues to work for them. Her relationship to the family, especially Antoinette, illustrates the often complicated transition from slavery to emancipation, a transition which affected both slaves and slave-owners.

Former elite as the new “Other”

Unlike Christophine, however, some former slaves felt a much stronger pull to sever ties with their former masters, feeling much more animosity towards them. This led to more vocalized tensions between white and black communities, as former slave-owners now had no legal support for controlling Jamaica’s black population. Furthermore, many families, like the Cosway’s, now faced financial instability, contributing significantly to their decline in power. As illustrated in Wide Sargasso Sea, many former slaves seemed less afraid of former slave-owners after emancipation and, given their large numbers, were able to alienate the formerly elite, pushing them into the “Other” position which they had formerly occupied.

I've heard English women call us white niggers. So between you I often wonder who I am and where is my country and where do I belong and why was I ever born at all. (Antoinette, 102)

As referenced above, the emancipation of Jamaican slaves had a profound effect on both former slaves and slave-owners, leaving many uncertain of how to negotiate their new roles. Race relations have a huge influence on the complexity of Antoinette’s relationship as she is not only isolated within her own family but outside of it as well, due to these racial tensions. Her only childhood friendship, with Tia, fails for this reason. Though they are only children, Tia has been already been indoctrinated with ideas about race and how it affects relationships, alienating herself from Antoinette. With no meaningful relationships, Antoinette struggles in forming her identity, as she has nothing to define herself off of except external expressions of hatred.

Dance! He didn't come to the West Indies to dance – he came to make money as they all do. Some of the big estates are going cheap, and one unfortunate's loss is always a clever man's gain. No, the whole thing is a mystery. (Wedding guest, 29 - 30)

Both Mr. Mason, Antoinette’s stepfather, and Rochester express their disdain for the West Indies at different points throughout the book. However, despite their dislike for the setting, both men still marry women from the area, resulting in unhappy marriages. As evidenced by the above quote, many question the motives of these men, seeing their presence in the West Indies solely as a money-making venture.

Rochester as Conqueror and the "Westernizing" of Antoinette

Another example of imperialism in Wide Sargasso Sea is Rochester’s role as the “conqueror” of Antoinette. This is demonstrated most obviously in two ways:

II.) Rochester’s re-naming of Antoinette: After learning about Antoinette’s tumultuous past and alleged history of “madness” within her family, Rochester takes to calling Antoinette “Bertha” instead, a much more “English” name. His attempt to rename Antoinette captures his desire to designate a new life for Antoinette, away from her origins in the West Indies.

Our garden was large and beautiful as that garden in the Bible – the tree of life grew there. But it had gone wild. The paths were overgrown and a smell of dead flowers mixed with the fresh living smell. Underneath the tree ferns, tall as forest tree ferns, the light was green. Orchids flourished [ ... ] Twice a year the octopus orchid flowered – [ ... ] The scent was very sweet and strong. I never went near it. (Antoinette, 19)

When I was safely home I sat close to the old wall at the end of garden. It was covered with green moss soft as velvet and I never wanted to move again. Everything would be worse if I moved. (Antoinette, 23)

Throughout the book, Antoinette comments on the physical beauty of her surroundings, particularly at Coulibri. At times, the beauty of her childhood estate seems to comfort her and make her feel safe. However, her narration also displays an underlying hopelessness and fear. Antoinette seems to sense that the decay and destruction of her "safe" place is inevitable, a sense which restricts her from feeling truly at ease.

Everything is too much, I felt as I rode wearily after her. Too much blue, too much purple, too much green. The flowers are too red, the mountains too high, the hills too near. And this woman is a stranger. (68)

[ ... ] it seemed to me that everything round me was hostile. The telescope drew away and said don't touch me. The trees were threatening and the shadows of the trees moving slowly over the floor menaced me. That green menace. I had felt it ever since I saw this place. There was nothing I knew, nothing to comfort me. 149

Almost immediately upon his arrival at Granbois, Rochester feels wary of the place. Though he remarks on its breathtaking beauty multiple times, he also feels unsettled by such grandeur - nothing feels familiar to his England home. Despite Antoinette's attempts to persuade him that the island is "safe," Rochester feels that Granbois is "against" him.

Don't you like it here? This is my place and everything is on our side. (74)

Like Coulibri, Antoinette feels safe at Granbois. Perhaps even more so - Granbois captures the same lush Caribbean atmosphere she loves, without the sense of hostility and isolation she sometimes felt at Coulibri.
While on the island, however, Antoinette's marriage begins to quickly disintegrate - the same seemingly inevitable decay of happiness which she experienced in her childhood home. As Rochester becomes more and more distant, Antoinette also becomes more withdrawn, frustrated by her failed attempts to please him. Eventually, they are consumed by their unhappiness. For Antoinette, Granbois loses the positive connotations it once had.

I loved this place and you have made it into a place I hate. I used to think if everything else went out of my life I would still have this, and now you have spoilt it. It's just somewhere else where I have been unhappy, and all the other things are nothing to what has happened here. (147)

To Antoinette, England has always been a place which exists solely in her imagination - she refers to it as a "dream" throughout the novel, to Rochester's annoyance. Having never traveled outside the Caribbean, Antoinette struggles to imagine a world that seems so different from her own.

England, rosy pink in the geography book map, but on the page opposite the words are closely crowded, heavy looking [ ... ] Names, Essex, Chelmsford on the Chelmer. The Yorkshire and Lincolnshire wolds. Wolds? Does that mean hills? How high? Half the height of ours, or not even that? [ ... ] After summer the trees are bare, then winter and snow. White feathers falling? Torn pieces of paper falling? (111)

After she arrives at Thornfield, locked in the attic, she still doesn’t believe that she is truly in the "dream-like" England she has imagined. She sees Thornfield as artificial, made of "cardboard,” a far cry from what she expected.

...this cardboard world where everything is coloured brown or dark red or yellow that has no light in it. As I walk along the passages I wish I could see what is behind the cardboard. They tell me I am in England but I don't believe them. We lost our way to England. When? Where? I don't remember, but we lost it. (181)

When it comes to interpreting their surroundings, Antoinette and Rochester hold clashing perspectives. While Antoinette feels safe and at-home on the island, Rochester feels uneasy, as if his surroundings cannot be real. Antoinette's language in describing England ("dream," "cardboard") indicates that she feels the same way his home. Each of them has been heavily influenced by the world in which they grew up and, as a result, their inability to understand the other's home complicates their emotional understanding of each other. 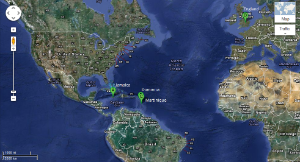 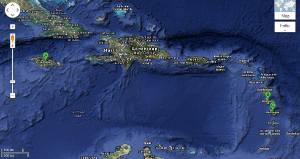